Urea-formaldehyde foam insulation (UFFI) was very popular in the 1970’s as a ceiling insulation. The foam was sprayed on top of the ceiling between the joists in order to reduce heat loss from the typical Australian home. A decade later, it became apparent that the vapour emitted from formaldehyde in the curing process and the breakdown of the product was not only unsafe but hazardous. Contact the team at InsulGuard for your formaldehyde insulation removal today.

WHY FORMALDEHYDE INSULATION REMOVAL IS KEY TO YOUR FAMILY'S HEALTH...

In the 1970’s when the use of Urea-formaldehyde foam insulation was prevalent, little was known about the toxic health effects of formaldehyde. Often extra formaldehyde was added to the mixture to ensure that the foam would cure. Since the product remains quite fibrous, the UFFI is highly susceptible to moisture and heat; releasing formaldehyde as a vapour into the indoor air. This formaldehyde vapour is what causes adverse health effects.

Formaldehyde when in vapour form is particularly known for its adverse respiratory problems and cancer risks for the inhabitants of the home. At low levels, it can trigger nose irritations, watery eyes, wheezing and coughing, allergic reactions and burning sensations in the eyes and throat. Elevated levels of formaldehyde can be carcinogenic and create symptoms such as headaches, insomnia, anorexia and loss of libido.

According to the International Agency for Research on Caner (IARC), formaldehyde is classified as a human carcinogen [1]. Whilst the particular details about formaldehyde and cancer is limited, several NCI surveys have linked increased risk of leukaemia and brain cancer with exposure to formaldehyde when compared to the general population.

How to know if your roof need formaldehyde insulation removal

Urea-formaldehyde foam insulation is typically is a white foam and can appear as either still intact in a hard foam or broken down in a powder form. Most insulation that is older than 10 years’ old that is not fibreglass batts can contain formaldehyde (even if not UFFI), and warrants an inspection from the professionals at InsulGuard Insulation.

The Urea-formaldehyde foam insulation is vacuumed up using a 30HP petrol vacuum system. Access is gained from the roof, where the InsulGuard team vacuum the formaldehyde with the appropriate respiratory safety equipment into bags. These bags are then removed from site and disposed of correctly. 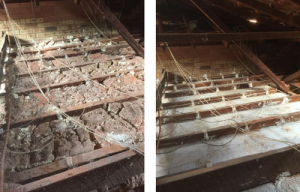 Worried you’ve got formaldehyde insulation? Get a free inspection by the InsulGuard team today.

1. International Agency for Research on Cancer (June 2004). IARC Monographs on the Evaluation of Carcinogenic Risks to Humans Volume 88 (2006): Formaldehyde, 2-Butoxyenthanol and 1 –tert-Butoxypropan-2-ol. Retrived August 25, 2016, from: http://monographs.iarc.fr/ENG/Monographs/vol88/index.php